Carlsbad, Calif. (December 6, 2016) – TaylorMade Golf, the industry leader in iron technology, has taken innovation to the next level with a new approach to engineering with the new, re-engineered M2 irons and the introduction of the all-new M1 irons to round out the M family of irons to complement the M1 & M2 metalwoods. In 2015, RSi irons were a breakthrough in game-improvement design. In 2016, M2 was a breakthrough in distance-iron design. Taking everything they learned from the creation of those two products, TaylorMade engineers embarked to create a series of products in M1 & M2 that take aim at delivering distance, height, forgiveness and feel with predictable, consistent performance. 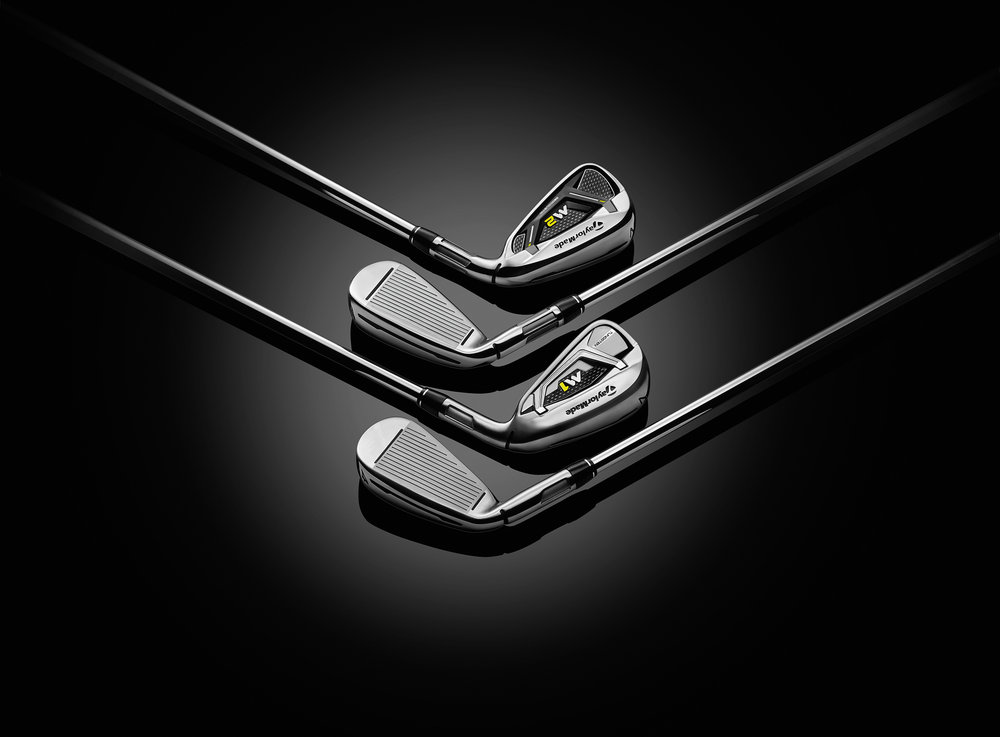 The 2017 M2 irons are the culmination of several years of developing meaningful technologies designed to help golfers achieve more distance, peak trajectory and forgiveness; overall, a more consistently performing iron swing after swing. As is the case with the M1 irons, as clubhead dimensions continue to get thinner across the face and topline, the challenge to design an iron with best in class sound and feel becomes more and more difficult. Engineers have utilized technologies first developed in RocketBladez irons (Speed Pocket), the Face Slots introduced in the RSi irons and an ultra-low center of gravity (’16 M2), effectively combining them in one product to produce a remarkably long and forgiving iron while maintaining playability.

The key to unlocking performance in the M2 irons is a combination of low CG and maximum COR. For example, even while adding Face Slots (which slightly raise CG), engineers have been able to lower CG and improve consistency by way of several significant changes:

Improving on the fluted hosel introduced in last year’s M2 irons, engineers developed a new thinner, wider six-sided fluted hosel that saves 5 grams (compared to 3 in the original M2 iron), allowing for the repositioning of 2 grams of discretionary weight lower in the clubhead. The new hosel bend slot also allows for a 30% improvement in bending.

An addition to the ’16 M2 irons, engineers incorporated Face Slots into the new M2 irons due to significant improvements made to the hosel flutes and 360° undercut that not only preserves but improves on the low CG design. Additionally, the M2 irons incorporate a new thin-wall Speed Pocket, which is designed to increase face flexibility and protect ballspeed on strikes below face-center while increasing launch angle and ballspeed. A 33% thinner front wall of the Speed Pocket in the long and mid irons is intended to increase face displacement at impact compared to previous models.

Similar to the M2 metalwoods, the new M2 irons were designed employing TaylorMade’s new ‘Geocoustic™’ engineering techniques; acoustics tuned through geometry - better feel through geometry, better sound through 3-D damping and an optimized rib structure to create ideal frequencies for pleasing sound & feel. This is accomplished through the incorporation of lightweight ABS and carbon fiber to increase rigidity and improve sound absorption of the badge. The fins of the badge have been strategically positioned behind the Face Slots and integrated into the back bar to help dissipate energy and further dampen sound created by the clubhead’s 360° undercut and ultra-thin 1.5mm face.

Complementing the M2 irons are the all-new M1 irons, an entirely new line that completes the M family of product. The intention while designing the M1 irons was to bring as much of the speed, forgiveness and playability of the M2 but deliver it to the player who prefers a slightly more compact look along with additional control and workability. This was achieved by using many of the same technologies as M2 while adding a tungsten weighting system to allow for more freedom to create the shapes needed without sacrificing low-CG, COR or MOI.

To do this, the company first focused on removing weight high in the clubhead, utilizing 15-gram high-density Tungsten added in the toe-side sole of the 3 through 7 irons to lower and center the CG; designed to create even more speed and thus more distance by way of an increased moment of inertia on off-center impacts.

As with any center of gravity optimization equation, discretionary mass is the currency which engineers necessitate. Through the incorporation of Tungsten, TaylorMade was able to locate the center of gravity less than 1mm from center face along the heel-toe axis as well as drop the vertical position of the center of gravity in the 3 through 7 irons. The company has also redesigned its fluted hosel, which is now a 180° design that has successfully accomplished weight savings without compromising the look preferred by better players at address.

Incorporated into TaylorMade's M1 irons are the company’s proprietary Face Slots, which are designed to increase flexibility at the boundary of the clubface to improve consistency of ballspeed on off-center impacts. The flexibility of the face is also intended to ensure maximum COR under USGA/R&A rules, providing maximum ballspeed and higher launch. This combination of technologies is designed to produce longer, higher shots with improved consistency and dispersion on all shots.

2016 marks the fifth year of and latest refinement of TaylorMade’s revolutionary Speed Pocket Technology, a slot in the sole that is intended to increase face flexibility and protect ballspeed on impacts below face center while increasing launch angle and ball speed. The new Speed Pocket features a front wall that has been reduced 33% in thickness to promote increased face deflection. Engineers have also been able to thin the leading edge and overall sole thickness of the club to new minimums, resulting in improved performance without sacrificing durability. The result is a visual appearance at address suited for the aspirational and better players while offering performance typically found in modern distance irons and maintaining the turf interaction forgiveness of a wider, more cambered sole.

One of the challenges with thin face, high COR irons is the sound they produce at impact. As the faces of irons have become thinner, managing sound has become an increasingly integral element in iron design. Similar to the new M2 irons, the M1 irons also implement TaylorMade’s Geocoustic engineering; acoustics tuned through geometry. TaylorMade’s fin badge is a feature that works in conjunction with Face Slots to dampen unwanted low-frequency, long duration sounds. The sound of the M1 is optimized using thin yet stiff head geometry combined with strategically placed reinforcements in the topline. The resulting sound is then dampened using a very stiff fin badge connecting the back of the flexible face to the stiff back bar of the iron for optimal sound damping.

The improved M2 irons as well as the all-new M1 irons represent a breakthrough in combining incredible distance with industry-leading forgiveness. Through the use of innovative technologies and purposeful design, these irons will appeal to a wide range of golfers seeking the complete performance package.

Available at retail on March 1, 2017, M1 irons ($999 steel; $1,199 graphite) will be offered in 3-iron through SW. Players will have a choice of True Temper’s popular XP95 steel shafts or MRC Kuro Kage Silver graphite shafts in addition to numerous additional custom shaft options.